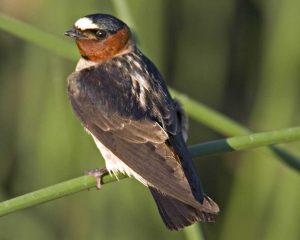 A building boom has hit the North Fork of the Flathead, and for once, the neighbors are celebrating.

“They’re building a town right in our town,” Polebridge Merc owner Will Hammerquist said of the colony of cliff swallows that has claimed eminent domain on the eaves of his solar barn. “They arrived about two weeks ago. And do you see any bugs? Look at what they’ve done to the mosquitoes.”

Indeed, Polebridge feels remarkably bug-free compared to the forests of Glacier National Park just minutes to the west. The tiny birds feed on flying insects. What appear to be drunkenly random flight paths actually trace life-and-death pursuits of food on the wing.