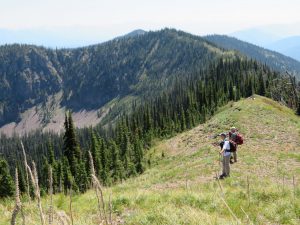 Sometimes, an election year is a Good Thing . . .

On a day that has already seen a historic win for our public lands, the news got even better when the House passed the Great American Outdoors Act (GAOA) this afternoon by a 310-107 vote.

The bill, which the Senate overwhelmingly passed back in June, now moves to the president’s desk.

This is a tremendous victory for public lands in Montana and across the country. Most notably, the bill will provide full, dedicated funding for the Land and Water Conservation Fund (LWCF), one of our nation’s most critical conservation programs. LWCF has been essential to hundreds of public lands projects across Montana, including the acquisition and development of numerous state parks, the construction and maintenance of public trail systems, and the development of boat ramps, campgrounds, and fishing access sites. The fund, which disburses royalties from offshore oil and gas drilling, has contributed over $600 million to Montana projects in its 55-year existence. The bill will also provide some $9 billion to address the maintenance backlog facing our national public lands.

The Senate passed an omnibus public lands bill on a vote of 92-8 on Tuesday, allowing permanent reauthorization of the Land and Water Conservation Fund and blocking a proposed gold mine on the edge of Yellowstone National Park.

Well, now… we’ve got some bipartisan action on energy, as well as on the Land and Water Conservation Fund . . .

In a show of bipartisan collaboration, the U.S. Senate passed a sweeping bill that reforms many of the nation’s energy policies and boosts research and development of new technology, including so-called clean coal, while also making strides for environmental conservation, including the permanent reauthorization of the Land and Water Conservation Fund.

The bill, passed April 20 with an 85-12 vote, will try to mesh with similar House legislation and, if signed into law by President Obama, would be the nation’s first major energy reform in nine years.

Reauthorization for the Land and Water Conservation Fund made it into the pending omnibus spending bill, but the ‘fire-borrowing’ fix for funding large wildfires did not. The wildfire measure was tied to a set of logging measures that raised opposition on both sides of the aisle . . .

The 2,009-page bill does include re-authorization of the Land and Water Conservation Fund, which was a bipartisan goal of Montana Republican Sen. Steve Daines, Republican Rep. Ryan Zinke and Democratic Sen. Jon Tester. But the Montana delegation’s push for categorical exemptions and expedited approvals of logging projects ran into opposition from both national environmental groups and Senate Republican leadership.

Both Senate Energy and Natural Resources Chairwoman Lisa Murkowski, R-Alaska, and ranking member Sen. Maria Cantwell, D-Wash., opposed including the Forest Wildfire Funding and Forest Management amendment that was backed by a large coalition of logging, recreation and conservation groups as well as members of Congress from both parties and the Agriculture Department.

Montana state and federal political leaders are getting worried about the possible expiration of the Land and Water Conservation Fund . . .

Montana’s top political officials are all declaring support for the federal Land and Water Conservation Fund as it nears a possible expiration in September.

Both Republican U.S. Sen. Steve Daines and Democratic U.S. Sen. Jon Tester released announcements this week about the program’s reauthorization language in the Senate’s Energy Policy Modernization Act of 2015. That bill is set for committee markup next week.

Also this week, Gov. Steve Bullock wrote the entire congressional delegation with a plea to save the 50-year-old program.