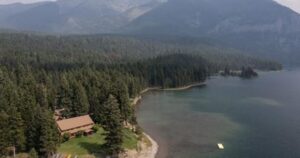 We are 38 Montana professional wildlife biologists and habitat managers with a total of 1,196 years of experience who have served as university faculty, commissioners on the Montana Fish and Wildlife Commission, or as professional agency staff with the U. S. Forest Service; Montana Fish, Wildlife, & Parks; U.S. Geological Survey; U.S. Fish and Wildlife Service; U.S. National Park Service; and Tribal wildlife agencies.

An “adventure lifestyle” corporation, POWDR Inc., has proposed to expand Holland Lake Lodge, which operates on public land via a USFS special use permit. This proposal is apparently fully supported by the Flathead Forest Supervisor who said: “Improvements at the Holland Lake Lodge and the East Holland Lake Connector Trailhead would offer the opportunity to satisfy some of the increased demand for outdoor recreation on public lands in the Swan and Flathead Valleys.” This project will not “satisfy increased demand for outdoor recreation” but instead will massively increase demand with many negative impacts of outdoor recreation in prime grizzly bear and lynx habitat.

The proposed development will triple lodging capacity and extend the operating season. It will also expand human influence far beyond the allotted 15 acres with increased visitor use and intensity of use. The season extension from Nov-Jan (the current season for the lodge ends mid-October) is significant as it extends and intensifies the potential for conflicts with bears, lynx, and with continued habitat disturbance. The combination of additional lodging rooms and season extension would increase the user days from 11,340 user days per year at present to 46,980 user days per year (overnight guests only). This means this proposal will result in 35,640 more user days each year on the public lands around Holland Lake.

These tens of thousands of additional users will not just stay at the 15-acre permitted lodge site. These people will be spending an additional 35,000+ days on the public lands around Holland Lake, on the Swan Face, the Mission Mountains, and in the Swan Valley. This additional use will have significant negative impacts on wildlife and wildlife habitat and will forever change the character of the Swan Valley.

Given what the POWDR corporation has done at their other properties, they will likely promote and market “adventure” recreation on adjacent public lands such as mountain biking, mountain bike trail development, hiking, trail running, special pack trips into the adjacent Bob Marshall, skiing, XC skiing, and perhaps heli-skiing, helicopter sightseeing, and heli-hiking in the Swan and Mission Mountains as enticements to come to their new Holland Lake Lodge. This is commercialization of public lands for corporate profit at the expense of Montana’s wildlife and wildlife habitat.

As professional wildlife managers and habitat managers we believe this proposed expansion of the Holland Lake Lodge is inappropriate for grizzly bear and lynx habitat, for the NCDE grizzly bear recovery zone, and for public lands in the Swan Valley.

Approving this proposal will depart from the commitment the USFS made in the NCDE Conservation Strategy to manage public land in the NCDE Recovery Zone at or close to the baseline level of public land development that allowed the grizzly population to recover and remain healthy. The careful management of public land inside the Grizzly Recovery Zone is especially important as private land development in Montana rapidly accelerates with increasing risks to grizzly bears and other wildlife. As professionals, we request that the Flathead Forest reject this proposed commercial development and massive expansion of Holland Lake Lodge.