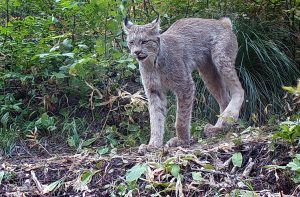 A three-year Glacier Park lynx population survey just finished up and researchers are now looking at what the data tells them . . .

Like fur-covered ghosts they silently stalk the forests of Glacier National Park.

Little is known about the population of Canada Lynx — rarely glimpsed by visitors — that make the Crown of the Continent their home, but a recently completed three-year scientific study is hoping to change that.

Here’s an interesting piece on the efforts over the last 20-plus years to collect data on rare, elusive species like the Canada lynx . . .

In a state where regal mountains and unconfined rivers demand attention and esteem, there exists also the less obvious, but no less significant creatures that call these places home. And one would be hard-pressed to find a Montanan who hasn’t acknowledged a simple creed: our state wouldn’t be as special if our wild landscapes lacked wildlife.

“These animals are part of Montana’s history, and when some of these species start dropping off, like you lose a lynx here or some grizzlies there, then you lose the essence of our state’s culture,” said John Squires, a research wildlife biologist with the U.S. Forest Service’s Rocky Mountain Research Station in Missoula.

Squires has devoted decades of his life to researching some of Montana’s most elusive animals, the ones most humans will never witness in their natural habitats. At the heart of those efforts is the threatened Canada lynx, an incredibly rare and snow-dependent cat facing potential removal from the federal Endangered Species List despite there being a lack of sufficient scientific evidence to support delisting.

The new millennium brought a new challenge for Lorin Hicks.

For years, Hicks has worked as a wildlife biologist for Weyerhaeuser and its predecessor, Plum Creek Timber Co., studying the inhabitants of Northwest Montana’s sensitive forests.

He gained a new research focus in 2000, when the U.S. Fish and Wildlife Service listed the Continental U.S. population segment of Canada lynx as a threatened species. That move required the agencies that manage area forests to take the lynx’s well-being into account.

The U.S. Fish and Wildlife Service is considering removing the Canada lynx from the threatened species list . . .

The Fish and Wildlife Service said it will begin drafting a rule to revoke the lynx’s threatened listing across the Lower 48 state under the Endangered Species Act. Wildlife advocates said they would challenge the move.

Here’s a pretty interesting article from the Hungry Horse News regarding an effort to study small carnivores in the Swan and Mission valleys . . .

Down in the basement of the Condon work center there’s a wall with paper bags tacked to it, carefully labeled, drying out.

He used to have the bags in his living room, but it smelled like a very old litter box and his wife-to-be almost left him, he joked.

Here’s a well-researched piece by Rob Chaney of the Missoulian. It discusses the status of the ‘lynx rule,’ which recently survived a whole series of judicial appeals . . .

A court order to do more work on protecting Canadian lynx in Rocky Mountain forests could become a late-season battleground for congressional action this winter.

Last week, the Supreme Court let stand a U.S. 9th Circuit Court of Appeals ruling that the U.S. Forest Service has to take a big-picture look at how it protects critical lynx habitat across 12 million acres touching 11 national forests. While wildlife advocates claimed a major win for the Endangered Species Act, timber industry supporters vowed to rewrite laws to speed up logging projects.

“It’s now known as the Cottonwood decision, and it affects pretty much the whole Nort

hwest,” said Julia Altemus of the Montana Wood Products Association. “I’m hoping we can find a path forward, either legally or by a congressional path.”

Trapping advocates’ objections to new state rules on lynx and wolverine trapping aren’t enough to block a settlement requiring tougher protections for those animals, according to a federal judge in Missoula.

“The fact that, as a result of the regulatory changes … trappers may be left with obsolete traps, will have to check their traps more frequently, and may ultimately trap fewer animals does not constitute formal legal prejudice sufficient to torpedo the parties’ compromise,” U.S. District Judge Dana Christensen wrote in his order to dismiss Tuesday. “Their apparent displeasure with the final product is insufficient to reject the parties’ settlement.”

The original case pitted the Friends of the Wild Swan, WildEarth Guardians and Alliance for the Wild Rockies against the Montana Department of Fish, Wildlife and Parks and its board of commissioners.

Trapping regulations have been tightened up around Glacier and Yellowstone national parks to avoid accidental lynx capture . . .

Montana wildlife officials have tightened trapping regulations outside Yellowstone and Glacier national parks to reduce the chances that threatened Canada lynx accidentally will be caught.

The changes include restrictions on the types of traps, snares and bait that can be used in special protection zones outside the parks

Montana wildlife officials are considering stricter regulations in an effort to reduce the chances of Canada lynx being caught in traps set for other animals outside Glacier and Yellowstone national parks.

The plan presented to the state Fish and Wildlife Commission on Thursday is part of a settlement agreement in a lawsuit filed in 2013 by three environmental groups over trapping in the threatened species’ habitat.

Several of the settlement’s statewide restrictions are already in place, but additional changes are needed in special zones near Yellowstone National Park and a wider area outside Glacier National Park in northwestern Montana, Fish, Wildlife and Parks attorney Aimee Fausser said.