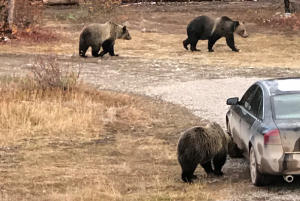 This year’s “a fed bear is a dead bear” lesson: Those grizzlies attracted to the Polebridge area by the oats in the hay field south of town eventually forced management action by Montana Fish, Wildlife and Parks. Two are dead; one was relocated to Glacier Park . . .

It’s an active season for bears as they prepare to den for winter. Fish, Wildlife and Parks officials say they’ve euthanized two yearlings that had become habituated to humans, and captured two others.

From the FWP press release:

Landowners reported that the yearlings were ripping into a yurt, broke into a cooler, got into garbage, tried to get into bear-resistant garbage containers, and attempted to break into cars and trailers. The adult female was observed with the yearlings but mostly stayed in the background. The yearlings were very food-conditioned and habituated to human presence.

Attempts to haze the bears were unsuccessful.