There is no open burning, however. That will have to wait until October, if not later.

The cool, wet weather has really knocked things down. South of Glacier Park, the Essex evacuation order is cancelled and traffic on U.S. Highway 2 through the area is back to normal. Locally, the forest closure in the North Fork was lifted, as well as most of the closures in the Kootenai Forest. Trail Creek Road is open all the way through. Quite a few fire crews are demobilizing.

Here’s an overview of conditions throughout the region . . .

Cool, rainy conditions in the Fortine area were favorable enough on the Marston Fire that the fire management team and Flathead and Kootenai national forests have lifted most of the land closures in the Whitefish Range.

That team is managing several fires, including the one burning on and around Marston Mountain that has covered 7,000 acres.

Spokesman Tom Rhodes said the Flathead National Forest has rescinded all of its closures in the Glacier View Ranger District and most of the Kootenai-managed Ten Lakes area has reopened with the exception of Sinclair Creek Trail.

In case it you missed it in this morning’s Kootenai fire complex report, the North Fork area closure in the Flathead Forest and the Grave Creek/10 Lakes area closure in the Kootenai Forest have been rescinded. The Forest Service is no longer worried about the Marston Fire making a run toward the North Fork. Also, Trail Creek Road is open again all the way through. Looks like the cool, damp weather is really helping.

From a recent announcement on the Northeast Kootenai Complex InciWeb site . . .

See/click on the map below. For a full resolution version, download the PDF version (1.3MB).

Trail Creek Road is presently closed at the Kootenai National Forest boundary — i.e., at Trail Creek Pass. This is part of the general area closure associated with the Marston Fire. The fire is not moving towards the North Fork at this time.

Here’s a good summary of the wildfire situation throughout this corner of Montana . . .

Authorities closed a section of U.S. Highway 2 near Essex on Thursday to provide safe access for firefighters battling the Sheep Fire, a 232-acre blaze that has grown to within 1 mile of the highway and river corridor near the southern boundary of Glacier National Park.

There are no evacuation orders, but Flathead County Sheriff Chuck Curry and his deputies notified 106 residents in and around Essex that they must prepare to leave and recommended they begin loading their cars immediately, Flathead County emergency information officer Jennifer Rankosky told the Associated Press. Forty-two people were home and notices were left at the rest of the homes.

Over 200 structures in the area are at risk, including homes, according to fire managers.

Fire and county officials were assessing how to best protect structures in the community. Red Cross officials were preparing a shelter in West Glacier 30 miles north on U.S. Highway 2, Rankosky said. 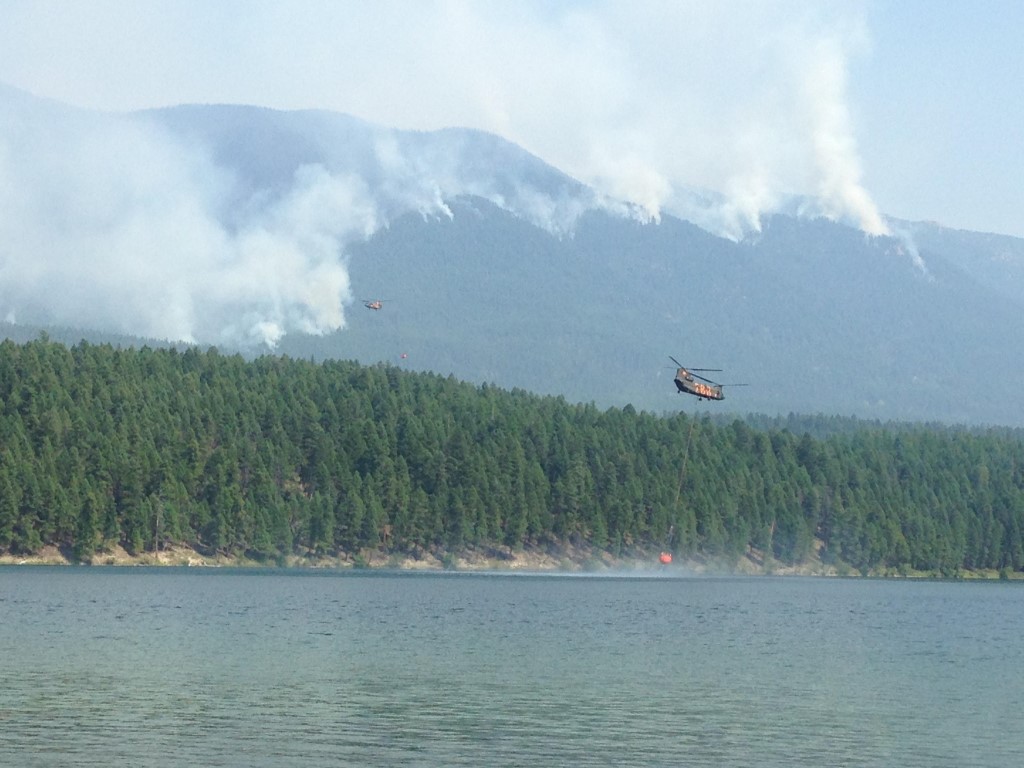 The Kootenai Forest is having plenty of wildfire issues . . .

The Napoleon Fire on Thursday forced additional evacuations near the community of Noxon in the Kootenai National Forest, while pre-evacuation orders were given along a stretch of Montana 200 near the Idaho border.

On Wednesday, the quick-growing fire forced the evacuation of 17 homes along Montana 56 and neighboring property owners were told to be ready to leave.

Thursday’s evacuations applied to residents farther south on the highway, between mile markers 8 and 3 on Montana 56, along with homes on the East Fork Bull River Road.

The Kootenai National Forest is scrambling to deal with a number of new wildfires . . .

The Kootenai National Forest added 14 new fires Saturday to its growing list that totals 49 wildfires that have started since Aug. 1.

The largest fire — the Marston Fire near Trego — had grown to 1,500 to 1,800 acres as of Saturday afternoon, according to Kootenai National Forest Public Information Officer Willie Sykes.

Here’s the noon update on the Marston Fire. Short version: The blaze is up to about 1500 acres. Shawn Pearson’s Type II team will be taking over tomorrow (Sunday) morning, which means they are taking this fire pretty seriously.

Today the weather is expected to be overcast with cooler temperatures (60-70° degrees) and a higher relative humidity. These conditions should moderate fire behavior. Firefighters are working on building a fuel break on the East side Deep Creek.

Shawn Pearson’s Northern Rockies Type 2 Incident Management Team is onsite at the Fortine Ranger District and will be transitioning with the district personnel. The team is expected to take command of the fire on Sunday, August 16.

Special Messages/Closures: The top priority is firefighter and public safety. Closures in the Marston face area, Stillwater area, and Laughing Water area remain in effect. An expanded area closure went into effect early this morning and is posted on inciweb. There are no evacuations in effect at this time.

There will be a community meeting at the Trego Community Hall at 7:00 pm on Sunday evening, August 16.

Lightening triggered more fires throughout this corner of the state as yesterday’s storms swept through  . .

As thunderstorms swept through Northwest Montana on Friday, wind, lightning and parched conditions created dozens of new fires while fanning the flames of existing ones.

Five separate wildfires are now burning at more than 1,000 acres apiece throughout the region, including the new Trail Creek and Marston fires, burning at 1,300 and 1,200 acres, respectively.

On the Kootenai and Flathead national forests, there were 55 active fires burning Friday night.