One of the North Fork Preservation Association’s founding goals was fighting resource extraction upstream in the Canadian Flathead Valley. This article provides a vivid illustration of what could have happened in the transboundary Flathead and what did happen in the Elk/Kootenai watershed just to our west . . .

On a recent late-August morning, buzzing above the peak-studded North Fork Flathead River Valley in a single-engine Cessna, the familiar summits of Glacier National Park dominated the view to the east, revealing a sky-high harbor of sapphire-green amphitheaters filigreed with waterfalls and bejeweled with cerulean lakes, representing a sliver of the one-million-acre ecosystem permanently protected from the intrusions of industry.

On board the six-seater plane were Erin Sexton, a senior research scientist with the University of Montana’s Flathead Lake Biological Station, and Richard Janssen, head of the Confederated Salish and Kootenai Tribes’ (CSKT) Natural Resource Department, as well as a trio of journalists and pilot Bruce Gordon, founder of the nonprofit EcoFlight, which for more than three decades has worked to illuminate critical environmental issues on western landscapes.

Cruising amid calm, clear skies, Gordon’s flight plan called for an aerial tour of the North Fork Flathead River Valley girding Glacier Park and spanning the U.S.-Canada border, where mining and energy development has been banned for years, before crossing over into the Elk and Kootenai (spelled Kootenay in Canada) River Basin south of Fernie, British Columbia (B.C.), below which a chain of open-pit coal mines is responsible for leaching harmful pollutants into Montana.

[Update: September 30] See also this photo-heavy article from the National Wildlife Federation about the same flight: An Eye in the Sky: Transboundary Mining.

A federal judge on Friday reinstated the last remaining drilling lease on land in the Badger-Two Medicine region near the Blackfeet Reservation, renewing the threat of industrialization on lands held sacred to the tribe even as its cultural leaders pledge to continue their fight.

“It’s just more of the same from people who refuse to consult with the Blackfeet Nation about the industrialization of our last cultural refuge,” John Murray, the Blackfeet Tribal Historic Preservation Officer, said in a prepared statement. “We’ve lived under this kind of reckless threat to our sacred lands for decades, and we will never surrender to roads and drill rigs in the Badger-Two Medicine.”

The long-disputed energy lease in the Badger-Two Medicine area flanking Glacier National Park was canceled in 2016 under then-U.S. Interior Secretary Sally Jewell, a decision upheld by a federal appeals court in 2020.

Here’s a partial list of things you cannot, under any circumstances, take into the Bob Marshall Wilderness, in Montana: chainsaws, mountain bikes, ATVs, tractors, wheelbarrows. If it has gears, it stays home. If it’s mechanical in any way, it’s a no-go.

Those are the rules deemed necessary to protect the United States’ 803 federally designated wilderness areas. The Bob Marshall Wilderness Complex, with its 1,849 miles of trails, happens to be one of the biggest.

The Bob, as it is affectionately called by Montanans, is home to wolves, grizzlies, elk, moose and mountain lions. The pristine territory is more than 1.5m acres, roughly eight times the size of New York City. And thanks to the 1964 Wilderness Act, it is not crossed by a single road. Drones and bush planes are also, today, strictly forbidden.

But here’s what you can take along for the ride instead: the humble mule.

Dear friends and supporters of preserving the North Fork,

July was a busy month for us to say the least! Upon the heels of a fabulous, amazing, and historical 40th Annual Meeting, as well as the most epic Polebridge Bear Fair, Flathead County has put NFLUAC on the agenda for their planning meeting on Wednesday, August 10th at 6pm (in person or zoom). Attendance and/or comments to support the recommended text amendment from you all are essential to keeping the North Fork ecosystem intact. I’m passing on the details from our friend and NFLUAC Chair, Randy Kenyon, to encourage each and every one of you to participate in this process.

Thanks for your continued support and good energy!

END_OF_DOCUMENT_TOKEN_TO_BE_REPLACED

Larry Wilson had nice things to say about the NFPA 40th anniversary annual meeting in his Hungry Horse News column this week . . .

I still miss John Frederick. Over the years we became close friends although our political views were usually completely opposed. We had hundreds of political discussions and we both enjoyed them. We both recognized that the other had the same or similar goals in mind—we just differed on how to reach those goals.

I thought of John a lot this week because he was one of the founders of the North Fork Preservation Association which celebrated its fortieth anniversary this week, and there were photos of John and even a sweatshirt with his likeness on it.

I have never been a member of the NFPA, but I always try to attend their annual meeting The business portion is always short—they tend to re-elect their officers almost automatically—John Frederick was president for over twenty years and our friend Frank Vitale was Vice-President for an equal number of years.

What they do have every year, including this year, is a knowledgeable, interesting and informative speaker. Also, I really enjoy the members and the opportunity to see and talk with them.

Looks like the success rate for relocating grizzlies is not very encouraging . . .

Moving grizzly bears is no easy task. It’s far better to let them move themselves.

That’s the takeaway from a new study published in The Wildlife Society’s Journal of Wildlife Management. The investigation analyzes 40 years of grizzly translocation events performed in Alberta, Canada. It determines that out of 110 attempts, just 33 translocations—or 30 percent—succeeded.

That conclusion supports some long-established foundations for our work here at Vital Ground. Wildlife managers use translocation both to remove problem bears from an area and to bolster recovering grizzly populations. In either case, the new research demonstrates that relocating bears is far from a cure-all. 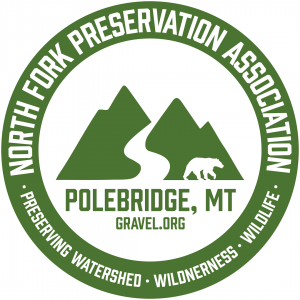 Chris Peterson of the Hungry Horse News wrote a great article on the History of the North Fork Preservation Association on the occasion of its 40th anniversary . . .

The year was 1982. The Canadians were eyeing lopping off the top of a mountain just north of Glacier National Park for the Cabin Creek coal mine.

The results for the North Fork of the Flathead River would have been wide-reaching and deleterious for the Park and the river. 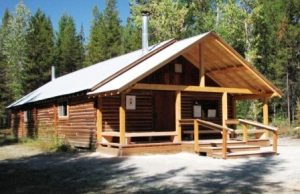 Our speaker this year is Sally Thompson who co-wrote People Before the Park: The Kootenai and Blackfeet before Glacier National Park, a detailed review of the indigenous peoples that inhabited the Glacier area before it became a National Park

We would love for you to be among our honored guests.

6:45pm:           Short business meeting to elect officers and members of the Board of
Directors and report on the work of NFPA

We are excited to spend an evening with all of you, share with you what we’ve been up to, and look forward to a great presentation.

NFPA/Polebridge Bear Smart is offering Kodiak brand 96 gallon bear resistant garbage containers for loan or purchase at a reduced price. This opportunity is being made to the Polebridge community with the help of grants and private donations.

Purchase price per canister is $300.
Canister Loan Program fee is on an able-to-pay basis.

The North Fork Preservation Association hosts Montana Conversation “An Inconvenient Grizzly” with Greg Smith on July 4th at 3:00pm. The program is being presented at Home Ranch Bottoms 8950 North Fork Road. The presentation is free and open to the public. Funding for Montana Conversations is provided by Humanities Montana through grants from the National Endowment for the Humanities, Montana’s Cultural Trust, and private donations.

Humans have been on the North American scene for an estimated 30,000 to 15,000years. Our arrival was preceded by the grizzly bear by perhaps 20,000 years – who would cross the same tenuous landscape bridge, arriving in North America some50,000 to 60,000 years ago. It is estimated that by the time of the Lewis & Clark Expedition, upwards of 5,000 to 10,000 grizzly bears roamed the American West. The settlement period of the West would see a dramatic decline in grizzly bear numbers and a corresponding decrease in available habitat. Now, as New West meets Old West,grizzly bear numbers are a focal point of concern and contention. Join Smith in biological, cultural, and philosophical look at the grizzly bear in contemporary Montana.

Greg Smith lives in Bozeman and was a Ranger Naturalist and Back-country Ranger in Glacier National Park for nearly 20 years. A longtime believer in the power of education,Smith now works with kids and adults as a storyteller, naturalist and historian. In his spare time, Greg enjoys trail running, backpacking, Nordic skiing and traveling the world on his bike.