Locally, the Coal Ridge Fire, a small, 0.2 acre blaze on the south face of Coal Ridge about 6 miles southwest of Polebridge, was declared out yesterday afternoon.

The Flathead Beacon has a good summary of other fires in the Flathead Valley . . .

The storm system that passed through the Flathead Valley earlier this week sparked several new wildfires on the Flathead National Forest in the Swan Lake Ranger District, the agency announced.

Smoke has been visible this week throughout the valley due to the Copper King Fire, which has burned 27,788 acres near Thompson Falls. More than 838 personnel are battling the blaze.

The Cold Lake fire is on the ridge just south of Lower Cold Lake and is approximately 10 acres in size, in sub-alpine fir, and has several small spot fires. There are seven smoke jumpers and a 21-person initial attack crew assigned to the fire. A Type 1 helicopter and a Type 3 helicopter were conducting bucket work to help suppression efforts. 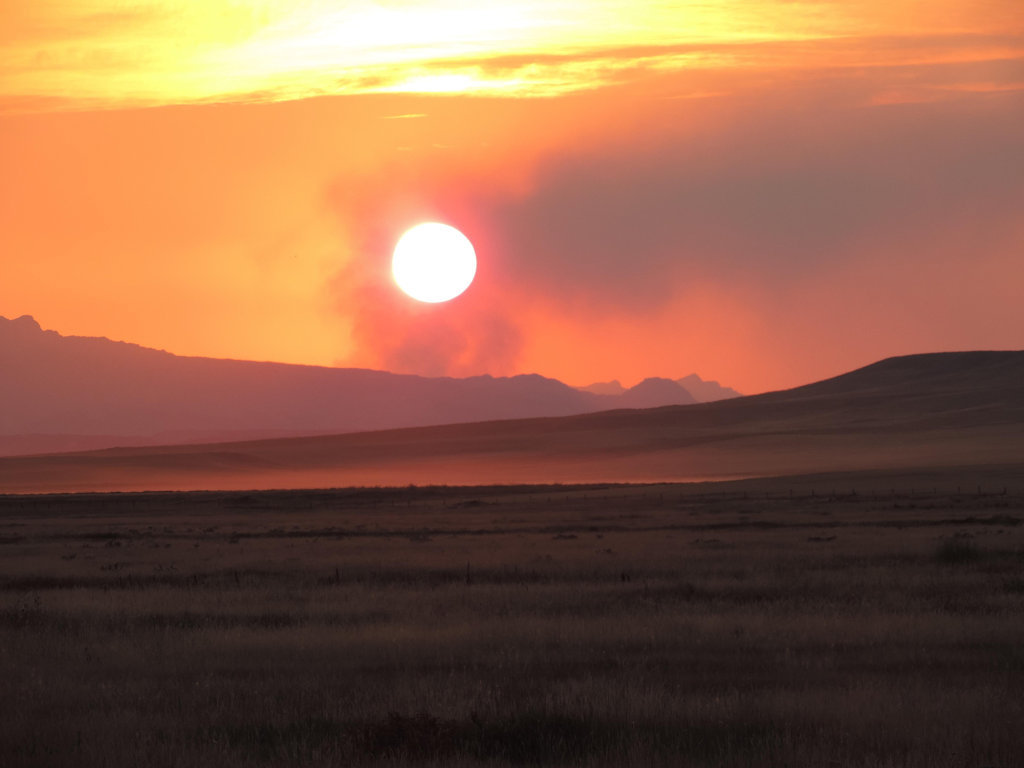 The Daily Inter Lake has a well-written retrospective on the past year’s extended fire season.

It’s in two parts. Here are the links:

Given the ill perception of bats, the winged mammals might not figure prominently into the public’s catalog of critters worth protecting in Montana, but if western bat populations plummeted, as they have in other parts of North America, residents would take notice.

Millions of bats are dying across eastern North America because of a fungal disease called white nose syndrome, and the potential for dramatic ecological imbalances has researchers scrambling to learn more about the fungus.

Bat biologists in the Flathead Valley of Montana and British Columbia recently conducted a so-called “bio-blitz” of research, compiling data they will add to last year’s bat inventory in the Upper Flathead River drainage – the first formal inventory of its kind – and releasing a report called “July 2014 Bat Inventory of Flathead River Valley.”

The Flathead Beacon posted an interesting article on fire lookouts . . .

Hiking to the remote mountaintops of the Flathead Valley can be a humbling admonisher of nature’s forces, but some of Montana’s peaks and ridges also bristle with a reminder of mankind’s attempt to subdue that vigor.

Like cabins in the sky, fire lookouts — a term used to describe both a person and a place — rose to prominence a century ago, when wildfire detection became a priority following the massive fires of 1910, and the U.S. Forest Service launched its fire lookout program in earnest.

In the 1930s, the Civilian Conservation Corps constructed more than 5,000 towers across the country, often in remote and inaccessible locations, and today, although modern technology and airplane surveillance play larger roles in spotting flames, the lookout program remains intact.

This turned up on the Flathead National Forest web site. It sounds pretty interesting . . .

The Flathead Community of Resource Educators (CORE), a network of individuals and organizations working together to increase awareness and understanding about the natural, historical and cultural resources of the Flathead Region, is celebrating Winter Trails Day on Saturday, January 11 with several free outdoor activities.

These free activities are a great way to enjoy the outdoors in winter and discover the fitness and social benefits of snowshoeing and cross-country skiing in Northwest Montana. All activities are suitable for beginners and families. Be prepared with warm clothing and wear sturdy hiking shoes or boots.

Our friends in the Canadian Flathead report that Flathead Valley bat populations could prove valuable in studying a disease that has killed some 7 million bats in North America . . .

The first formal inventory of bats in the Flathead, conducted by bat biologist Dr. Cori Lausen over a four-day period in June 2013, detected both species of highly-endangered bat in the Flathead: little brown myotis and northern myotis. (This is the first recording of northern myotis in southeast B.C. and it will be confirmed with follow-up study.)

White Nose Syndrome, responsible for the recent deaths of almost seven million North American bats, is a poorly-understood fungal disease that kills bats while they hibernate…

The warm days continue and the fire danger rises . . .

Fire danger in the Flathead Valley is rising and is now considered “high,” according to fire managers.

The U.S. Forest Service announced Tuesday the heightened fire danger on the Flathead National Forest and public lands in the valley, signaling an increased likelihood that fuels such as grass will ignite easily. Temperatures are forecasted to remain in the low 90s throughout the week and light fuels have dried out considerably in recent weeks, according to fire officials.

Although fire danger is elevated, no restrictions are currently planned for the Flathead Valley, according to Wade Muehlhof, a public information officer with the Forest Service. But that could change in the near future, he said.

A coalition of Canadian environmental groups is not happy with the progress shown by British Columbia and the Canadian federal government on implementing U.N. World Heritage Committee recommendations for the protection of the Elk and Flathead valleys . . .

“The World Heritage Committee was very clear about the need to secure this important connection for wildlife,” said Wildsight Executive Director John Bergenske. “Yet new mines are planned for the Elk Valley without a full cumulative effects analysis–at the same time as the Auditor General warns that B.C. is failing to protect biodiversity.”

In a report card released today, the third anniversary of the Flathead energy and mining ban announced in February 2010, conservation groups assess progress on five detailed recommendations made by the UNESCO World Heritage Committee.

The recommendations speak to the need for: a single conservation and wildlife management plan; prioritizing natural ecological values and wildlife conservation; a long-term moratorium on mining in southeastern B.C to ensure wildlife connectivity; improved coordination between the governments of B.C. and Montana, and; expanding Waterton-Glacier International Peace Park into part of the Flathead.

The report card concludes that the B.C. government has failed to comply with most of these key recommendations. It also points to a federally-owned coal block in the Flathead that is exempt from the B.C. ban on mining.

Snow amounts down-valley this winter were considerably lower than average, but higher elevations did OK overall . . .

Spring officially got under way Tuesday, ending one of the Flathead Valley’s mildest winters in recent memory.

From Oct. 1 through March 20, just 30.2 inches of snowfall had been measured at Glacier Park International Airport. That’s almost 26 inches less than the average of 55.8 inches for the same period. Precipitation, however, totaled 6.19 inches at the airport, not far off the average of 6.97 inches.

Mountain snowfall above the Flathead River Basin was quite different than in the valley, starting out well behind the average but eventually catching up to be 103 percent of normal.

The Daily Inter Lake has a story about boom and bust oil exploration in Montana, including its beginnings in 1901 near Kintla Lake . . .

The history of oil in Montana began in an area that never had any substantial development of the natural resource — the Flathead Valley.

American Indians and fur trappers knew about oil seeps in that area and early-day prospectors wondered about the potential for oil when bear hides sold at Tobacco Plains smelled of kerosene, according to a historical overview of mining in Montana compiled by the U.S. Forest Service.