Here’s another good story from the recent meeting of the Northern Continental Divide Ecosystem grizzly bear subcommittee. Of special note is that the bear managed, with considerable effort, to make it past Interstate 90, a substantial barrier to animal migration . . .

Slowly, but surely, grizzly bears continue to expand their range in Montana. Perhaps the most interesting find has been a male grizzly bear that moved south of Interstate 90 in the past year or so and now has a home range near Deer Lodge, outside of Butte.

The bear was radio-collared after getting into trouble with chickens, but has pretty much stayed out of trouble since, noted Montana Fish Wildlife and Parks biologist Cecily Costello at a meeting earlier this month of the Northern Continental Divide Ecosystem grizzly bear subcommittee. The bi-annual meeting brings bear managers and land management agencies to discuss all things grizzly.

According to radio-collared data, the grizzly made multiple attempts to cross Interstate 90. She said they believe the bear finally actually went under the highway, where a bridge goes over the Clark Fork River. That passage also allowed the grizzly to go under railroad tracks that parallel the highway as well. 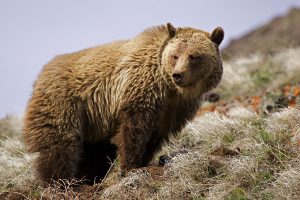 Montana grizzly bear managers had a lot to discuss and many stories to tell . . .

Region 2 bear specialist Jamie Jonkel spoke briefly about the fatality this summer of a bicyclist who was camping in Ovando and was killed by a grizzly bear that came into town.

Leah Davis Lokan, 65, of Chico, California, was killed when a bear attacked her in her tent . . .