In response to oral arguments by a coalition of wildlife advocates, U.S. District Judge Dana Christensen just granted a 14-day temporary restraining order suspending grizzly bear hunts in Wyoming and Idaho while decides whether the federal government should reinstate federal protections for the bears.

As mentioned several days ago, a number of conservationists put in for Wyoming grizzly bear hunting tags, with no intention of hunting a griz using anything more lethal than a camera. The effort has paid off in at least one case so far . . .

A famous and fiery critic of grizzly bear hunting who’s made a career photographing the big bruins will have a chance to partake in Wyoming’s first hunt for the species in 44 years.

That person is Images of Nature wildlife photographer Tom Mangelsen, who beat very long odds, drawing No. 8 on an issuance list that will allow up to 10 grizzly hunters into the field starting Sept. 15. Mangelsen learned of the results Thursday morning, when he took a call from his friend and assistant Sue Cedarholm.

Now, here’s an interesting approach to combating Wyoming’s grizzly bear hunt. Talk about putting your money where your mouth is . . .

Jane Goodall is a global icon, perhaps the most admired living environmentalist and legendary for her research with chimpanzees. Cynthia Moss is famous for her conservation work in eastern Africa battling elephant poachers and speaking out against trophy hunting.

Within the last few days, Goodall, 84, and Moss, 78, entered a lottery hoping to win a coveted hunting license in Wyoming allowing them to sport shoot a grizzly bear in the Yellowstone region. They have no aspirations to actually kill a bruin. Their maneuver is part of a mass act of civil disobedience to protest Wyoming’s controversial hunt of up to 22 grizzlies—the first in 44 years—slated to commence only weeks from now.

Called “Shoot ‘em With A Camera, Not A Gun,” the impromptu campaign, spearheaded mainly by women, has caught hunting officials in Wyoming off guard. It has also created a groundswell among those who condemn the state’s recommencement of a trophy season on grizzlies just a year after they were removed from federal protection. In May, Wyoming’s wildlife commission approved the hunt unanimously 7-0.

The Wyoming Game and Fish Department announced today a proposal to allow two dozen grizzly bears in the Yellowstone region to be killed through a state trophy hunt. The announcement comes despite strong public and tribal opposition to trophy hunting of the iconic bear and litigation challenging the removal of Endangered Species Act protections last summer.

NFPA is opposed to the trophy hunting of grizzlies.

Bonnie Rice from Sierra Club said in a press release: “Grizzly bears are one of the slowest animals to reproduce; it takes a female grizzly ten years to replace herself in the population. It’s a pipe dream to believe that hunters are going to be able to distinguish between male and female grizzly bears. We will undoubtedly lose more female grizzlies in a hunt– even more than authorized under this proposal.”

The first Wyoming grizzly bear hunt in over four decades will target 24 animals if commissioners who oversee the state’s wildlife sign off on a proposal released Friday.

A topic of fierce controversy, the hunt is being devised in a way that state officials hope will limit the chance of the bold large carnivore being shot in public view, or killed adjacent to Grand Teton National Park. A no-hunting zone will abut the east boundary of the park, and throughout the Greater Yellowstone Ecosystem it will be illegal to kill a grizzly within a half-mile of a named highway, Wyoming Game and Fish Department Chief Warden Brian Nesvik said.

“The intention is to address public concern that was focused on there being hunting and wildlife viewing going on at the same time,” Nesvik said.

Here’s a good, balanced discussion of Chronic Wasting Disease (CWD) among Montana’s deer and elk population and the influence of Wyoming’s elk feedlots . . .

Last week the Montana Fish and Wildlife Commission asked Wyoming to stop feeding elk during the winter on the feeding grounds in the northwest part of that state. There are more than 20 Wyoming feeding grounds, some at the National Elk Refuge near Jackson, the rest in counties south of the refuge.

The commission’s letter was sparked by the discovery this fall of Chronic Wasting Disease in Montana deer just north of the Wyoming border in hunt units south of Bridger. The disease has infected both mule and white-tailed deer. CWD has since been detected in a mule deer buck killed just south of the Canadian border north of Chester. Since CWD is present in Canadian provinces north of us — Alberta and Saskatchewan — it’s probable the disease has been migrating into Montana across both borders, as well as from the east, where CWD was previously confirmed in the Dakotas.

As far as CWD goes, the commission’s letter probably arrives too late. The disease is in Montana, maybe it’s been here for some time, and evidence from other states suggests eradication is unlikely. The feeding grounds are, or will become, CWD hot spots, but eliminating them now won’t do much to slow the inevitable spread of the disease across Montana.

As mentioned here a couple of days ago, Chronic Wasting Disease (CWD – think of it as mad cow for the deer family) is starting to show up in Montana. A good argument can be made that Wyoming’s elk feedlots aid the spread of this disease . . .

Montana wildlife officials are asking their Wyoming counterparts to stop feeding elk after chronic wasting disease has appeared in the state.

Jackson Hole News and Guide reports the Montana Fish and Wildlife Commission sent a letter last week to the Wyoming Game and Fish Commission, saying their elk feeding practices could accelerate the spread of the fatal, contagious disease.

The Montana letter says officials respect how Wyoming handles its affairs, but management of the disease in Montana is affected by what happens in the neighboring state.

Chronic Wasting Disease (CWD), a disease affecting (so far) deer, elk and moose, has spread from Wyoming to Montana. This is a Very Bad Thing.

If you are new to this issue (or even if you aren’t), here are two articles to get you started. The first is an excellent overview by the Flathead Beacon’s Rob Breeding. The second is a more lengthy, detailed examination of the situation by Todd Wilkinson posted to the Mountain Journal (kudos to Debo Powers for spotting this one).

Chronic Wasting Disease Strikes Montana And Continues Its March On Yellowstone
As Wyoming Continues To Deny The Threat Posed By Feedgrounds, Critics Say Federal And State Agencies Demonstrate Epic Dysfunction For Their Lack Of A Coordinated Plan

Here’s more news regarding the ongoing effort to restore the black-footed ferret population . . .

A nocturnal species of weasel with a robber-mask-like marking across its eyes has returned to the remote ranchlands of western Wyoming where the critter almost went extinct more than 30 years ago.

Groups of ferret releasers fanned out over prairie dog colonies covering several thousand acres of the Lazy BV and Pitchfork ranches. Black-footed ferrets co-exist with prairie dogs, living in their burrows and preying on them. 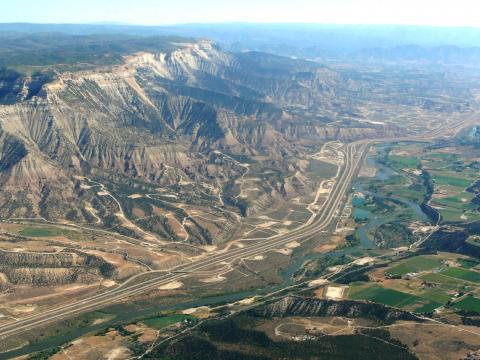 A wide-ranging wolverine study starts up next winter . . .

Researchers are working on a plan to study wolverines in four Rocky Mountain states to see if the animals that look like small bears with big claws can be reintroduced to some regions to boost their numbers and see how they might travel between mountain ranges.

Montana, Idaho, Wyoming and Washington state are working together because there are so few wolverines and they are spread across a wide area, a researcher with Montana’s wildlife agency said.

“It doesn’t occur that often that four states start to think about managing a species together,” said Bob Inman, carnivore and fur bearer coordinator for Montana Fish, Wildlife and Parks.