Here’s a good overview of the grizzly delisting suit currently making its way through the court system . . .

Federal attorneys pushed their case that Greater Yellowstone Ecosystem grizzly bears should be removed from Endangered Species Act protection, arguing in an appeal filed late Friday the U.S. Fish and Wildlife Service wasn’t required to do a comprehensive review of all grizzlies in the Lower 48 states.

The U.S. Department of Justice’s opening salvo to the U.S. 9th Circuit Court of Appeals also accused the lower court judge in Missoula of improperly substituting his opinion of the scientific evidence of grizzly genetic diversity for that of FWS biologists.

A couple of years ago, the U.S. Fish and Wildlife Service and National Park Service started taking public comments on a plan to restore the grizzly population of Washington’s Cascade Range. Now, they are a step closer to a plan that will include using some of Montana’s grizzlies to seed a new population in the North Cascades . . .

In a few years, some grizzly bears from Northwest Montana could have new homes in the North Cascades Ecosystem of Washington and British Columbia. The U.S. Fish and Wildlife Service and the National Park Service earlier this year released a draft environmental impact statement to reintroduce the iconic species back to the Cascades. At least some of the bears would come from Northwest Montana if the project comes to fruition.

The 6.1 million acre North Cascades have a smattering of grizzlies in Canada and in the U.S., the last known breeding female was seen in the early 1990s. The bears were hunted and trapped to near extinction by the Hudson Bay Co. about 200 years ago, noted Park Service spokesman Jack Oelfke.

Isolated by both geography and human barriers like highways and railroads, the bears have little chance of re-establishing populations on their own.

It’s been a long haul getting grizzly bears reestablished in the Cabinet Mountains . . .

In the summer of 1993, biologists with the U.S. Fish and Wildlife Service captured a 2-year-old female grizzly bear in British Columbia, along the North Fork Flathead River about 10 miles from the U.S.-Canada border, northwest of Glacier National Park.

Before loading the 80-pound sub-adult onto a truck and spiriting her 150 miles away to the Cabinet Mountains in northwest Montana, the crew assigned her an official designation — Bear 286.

A listening session on future grizzly bear management in northwest Montana drew lots of criticism from both bear advocates and livestock proponents.

“While the (U.S. Fish and Wildlife) Service claims it will maintain bear habitat security levels that existed in 2011, it is instead lowering the goal posts on what is considered secure bear habitat,” Keith Hammer of Swan View Coalition said in Missoula at Thursday’s workshop. He accused FWS of “lying” about grizzly population recovery to justify removing the bear from federal Endangered Species Act protection.

From the other direction, Montana Board of Livestock member Nina Baucus said the agency wasn’t doing enough to protect people from a growing population of grizzlies.

Nice to see grizzlies recovering more of their old range . . .

State game wardens have been busy monitoring and hazing grizzly bears as they show up on the prairies east of the Rocky Mountain Front. A trap was set for one after some chickens were killed.

Fish, Wildlife and Parks warden Mike Krings tells the Great Falls Tribune that he used cracker shells to haze a bear away from the outskirts of Conrad on Tuesday evening, while a grizzly bear making its way toward a small farmstead on Monday was spooked when Krings drove up.

Bear managers have set a trap for a grizzly bear north of Bynum after it pushed open the door of a chicken coop Monday and killed 20 chickens.

Over at the Flathead Beacon, Dillon Tabish posted a long, outstanding article on Chris Servheen, who just retired after 35 years as the fed’s first grizzly bear recovery coordinator. Recommended reading . . .

Last week, inside his office on the University of Montana campus, Chris Servheen wrapped up his 35-year career as the federal government’s first and only grizzly bear recovery coordinator.

The occasion on April 29 passed without fanfare as the 65-year-old worked quietly and alone, the final minutes winding down on a career as turbulent as it was influential.

As the foremost person tasked with saving a species as iconic as the grizzly bear, which teetered on the brink of extinction only 50 years ago, Servheen has been at the center of controversy and scrutiny for much of the last four decades.

Chris Servheen, whose name has appeared in quite a few grizzly bear stories here over the years, is retiring this month . . .

The nation’s first and only grizzly bear recovery coordinator is stepping down after 35 years, saying the threatened species has recovered enough for him to retire.

Chris Servheen of the U.S. Fish and Wildlife Service is retiring at the end of April. Wayne Kasworm will become acting recovery coordinator.

In 1805 the explorers Meriwether Lewis and William Clark, making their way across the West, were warned by American Indian tribes of grizzly bears’ awesome strength. At first Lewis scoffed at the tribes’ advice, writing in his journal that “in the hands of skillful riflemen they are by no means as formidable or dangerous as they have been represented.” A few terrifying encounters with the bears, though, changed his mind about that.

A little more than a century later, crowds at Yellowstone National Park would gather in delight to watch the bears dine on food scraps. Signs were marked “Lunch Counter … for Bears Only.” Those days are long gone, but crowds still flock to Yellowstone — nearly four million visitors every year — partly to catch a glimpse of the storied creatures.

I’ve seen a few wild grizzly bears, mostly in Alaska and British Columbia, and always from a distance. But each grizzly I’ve caught sight of was as fearsome and sublime as the last. You never get used to their raw power and massive bodies, or the mysterious intelligence in their dark, close-set eyes. 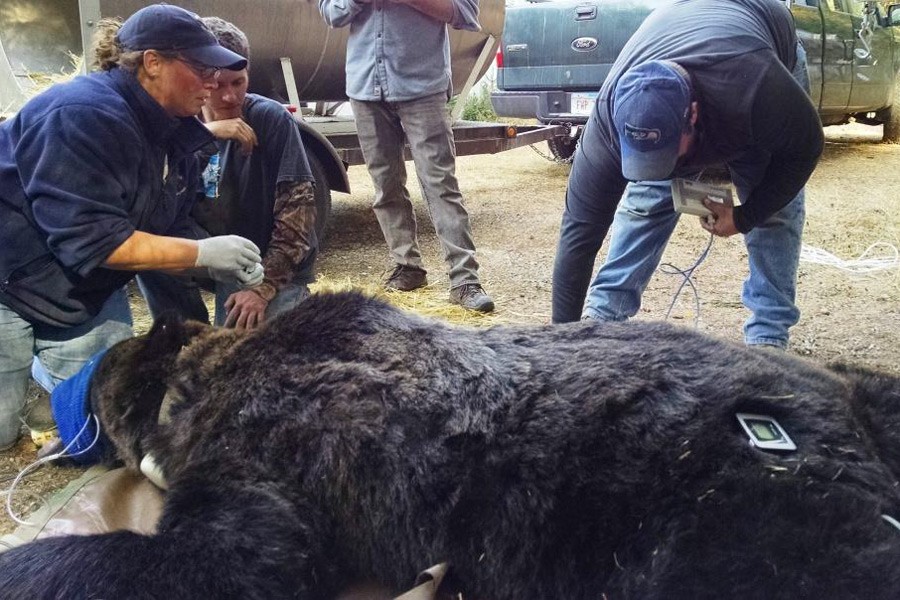 A big, mature grizzly migrated from the Yaak Mountains to the Cabinet Range, a major cause for celebration among the bear recovery folks . . .

Finally, there’s some good news out of bear country. Following a spate of bear-human conflicts in Northwest Montana… one recent grizzly encounter has prompted some cause for celebration.

On Oct. 5, a 500-pound male bruin was captured south of Libby after it cleared a non-functioning electric fence that was fortifying a beekeeper’s honey supply.

And while being caught with its paw in the honey jar is classic bad bear behavior, this 6.5-year-old grizzly’s journey to get to the Cabinet Mountains makes him special. It makes him the first documented bear to cross from the Yaak Mountains to the Cabinets in history, which is a boon for bolstering the isolated and relatively scant Cabinet Mountain grizzly population and promoting better genetic diversity there.

Grizzly bear recovery in the Cabinet-Yaak region is proceeding slowly . . .

Despite the robust recovery of grizzly bears in the forested mountains of Glacier National Park, the Bob Marshall Wilderness Complex and the surrounding landscape, the great bear’s future across the region remains far from certain.

The recovery zone spanning the Cabinet Mountains Wilderness, Yaak River basin and areas in between— about one quarter of the size of the Northern Continental Divide Ecosystem — has about one 20th of the grizzly population, growing at about half the rate.

The Cabinet-Yaak grizzly bear population contained 45 bears in 2012 when the U.S. Fish and Wildlife Service last conducted a population estimate. Wayne Kasworm, a grizzly bear biologist for the agency, estimates that population at about 50 today, half of the 100-bear recovery target identified after the population’s 1975 listing as “threatened” under the federal Endangered Species Act.