Here’s a very interesting report from the recent winter Interagency Grizzly Bear Committee NCDE subcommittee meeting regarding a debate, triggered by the recent application by POWDR to expand lodging at Holland Lake, over how to handle such issues when they affect core grizzly habitat. Even better, the meeting was chaired by Flathead Forest Supervisor Kurt Steele, who is currently juggling the Holland Lake hot potato.

…The disagreement over land management, specifically development of more overnight lodging, was laid bare in Missoula Friday morning at the winter meeting of the NCDE Subcommittee. That’s part of the national Interagency Grizzly Bear Committee, which coordinates the species’ recovery across six ecosystems in the West.

Tensions were high because of a recent proposal from Utah-based ski corporation POWDR to significantly expand Holland Lake Lodge in the Swan Valley, within the NCDE. The Flathead National Forest recently rejected the proposal. POWDR stated it plans to submit a new, similar proposal of the same size…

The Northern Continental Divide Ecosystem (NCDE) grizzly bear population is “The Heart of the Grizzly Nation.” This population is crucial to recovery in the rest of the lower 48 populations. As the federal government moves toward delisting these magnificent creatures, we need to become informed.

Dr. David Mattson is building a website intended to bring together much of the information that is known about grizzlies, including demography, diet and habitat, and conservation: https://www.mostlynaturalgrizzlies.org.

There will be a meeting of the NCDE Interagency Grizzly Bear Committee in Missoula on November 29 from 9:00am to 4:00pm. There will be updates from various agencies working on the grizzly bear recovery plan and a time for public comment at the end of the meeting.

As the grizzly bear population rises, the bears spread into more of their historic range . . .

A probable grizzly bear sighting just over the edge of the Missoula Valley highlights the theme of this week’s Interagency Grizzly Committee meeting in Choteau: People get ready.

“We’ve done such a good job with the recovery, the public needs to understand what’s happening and how they can be safe in where they live,” IGBC spokesman Gregg Losinski said on Friday. “There are challenges because we’re not doing recovery anymore — we’re doing management.”

Since getting federal protection under the Endangered Species Act in 1975, grizzly bears now number nearly 2,000 in the continental United States. Most of those are concentrated in the Greater Yellowstone Ecosystem around Yellowstone National Park (about 700 grizzlies) and the Northern Continental Divide Ecosystem between Missoula and Glacier National Park (about 1,000 grizzlies).

The grizzly bear delisting process is making its way through the federal bureaucracy.

The work of crafting a draft final rule to delist the Greater Yellowstone Ecosystem’s grizzly bears is complete, and now the plans must navigate the many layers of federal bureaucracy.

The timeline for publishing the rule is unclear, in part because of the transition of presidential administrations and the U.S. Fish and Wildlife Service’s own influx status, said Jodi Bush, the agency’s Montana Ecological Field Office supervisor.

“We’ve had all of our packages stopped in headquarters lately,” Bush said in an interview at the Interagency Grizzly Bear Committee’s Yellowstone Ecosystem Subcommittee meeting held in Jackson last week. “They want to look at stuff. With the [recently protected] bumblebee it took an additional 39 days for them to get through it.”

Members of the Yellowstone Ecosystem Subcommittee of the Interagency Grizzly Bear Committee voted to approve a conservation strategy allowing for delisting of the grizzly bear in the region including Yellowstone Park. The vote was not quite unanimous, with the superintendent of Yellowstone Park voting against it and Leander Watson of the Shoshone-Bannock Tribe abstaining . . .

Wildlife officials have moved one step closer to removing the Yellowstone grizzly population from the Endangered Species Act by approving a future conservation strategy.

The Yellowstone Ecosystem Subcommittee of the Interagency Grizzly Bear Committee voted to approve the conservation strategy, sending it to the U.S. Fish and Wildlife Service as part of what has been a months-long process to potentially remove the Yellowstone grizzly from federal protection.

The U.S. Fish and Wildlife Service proposed lifting the federal protections for the Yellowstone bears in March. Grizzly bears were first listed as threatened in 1975 when the Yellowstone population was estimated to have as few as 136 bears. Recent estimates say the population is now above 700. 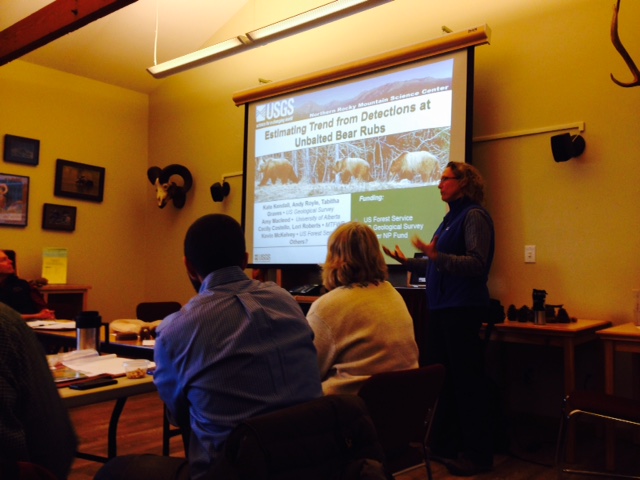 Representatives from all of the agencies who manage and/or research grizzly bears in the Northern Continental Divide Ecosystem (NCDE) met on Wednesday, December 2, at Lone Pine State Park near Kalispell to share information about grizzly bear recovery efforts.  The meeting room was packed with agency personnel, scientists, representatives from conservation groups (including NFPA), and the general public.

Chris Servheen, who reported on the Grizzly Bear Conservation Strategy, said that they are building the foundation for delisting grizzly bears, but are not ready to make that proposal yet.  He indicated that the Conservation Strategy should be finalized by the end of 2016.  He stated that within the next ten years, there should be connectivity (bears moving freely) between the NCDE and Yellowstone which will insure genetic viability between these bear populations.

Bear Management specialists from each district (including Tim Manley) reported on 2015 bear management activities, including human conflicts.  According to Tim, chickens topped the list of attractants causing bear problems.  Cat food was the second biggest problem.

Each agency (FS, FWP, DNR, GNP, BLM, FWS, Salish Kootenai and Blackfoot Tribes) gave updates related to the Draft Habitat Standards for the lands that they manage.
Cecily Costello (who replaced Rick Mace after he retired) presented updated figures on Population Monitoring.  Estimates are that there are 837-1039 grizzlies in the NCDE with a 2.3% increase in the population each year.  (This is a smaller increase than the estimates that Rick Mace made in 2012 which showed a 3.1% increase annually.)

Tabitha Graves presented research on how climate change is affecting huckleberries, which is a keystone species for lots of wildlife including grizzlies.  Food supply affects reproduction and survival.  This year, the berry size was smaller and there was lower productivity.  There was a month difference in the timing for berry development this year and scientists are expecting this year’s weather patterns to happen more frequently.  The question is:  In future seasons, how will this affect grizzly populations and the number of human conflicts if food is scarce?

The meeting ended with a few questions from the public.

Top grizzly bear experts from Montana, U.S. and Canadian governments descended on Many Glacier Hotel last week to discuss the future of grizzly bear populations throughout the Northwest, including in and around Glacier National Park.

The Interagency Grizzly Bear Committee, created in 1983 to oversee recovery of grizzly bears in the lower 48 states, is considering removing the protected status under the Endangered Species Act of two bear populations: those in the Northern Continental Divide and Yellowstone ecosystems.

Grizzlies were one of the first high-profile listings under the 1973 law, listed as a “threatened” species in 1975 after being extirpated from the vast majority of their historical range.

“The animals are leading the way — they’re recovering themselves, along with a lot of our help…”

The U.S. Fish and Wildlife Service is a little closer to removing grizzly bears from the endangered list in the Yellowstone area . . .

A new rule removing the bears from the endangered species list could be finished by the end of the year.

The Flathead Beacon has a good write-up on grizzly bear recovery . . .

Grizzly bears, the iconic species that once roamed the Western landscape before being threatened nearly to oblivion, have staged an historic comeback across the northern Rockies.

That much is not debatable. The question now is where do grizzlies go from here?

Wildlife officials are preparing to restart the process of removing special protections under the Endangered Species Act for bears near Yellowstone National Park. The move could occur as early as next month and lead the way for other delisting proposals, including one for Northwest Montana’s robust population.

Rob Chaney of the Missoulian posted a good summary of the state of the grizzly bear recovery effort.

Since the grizzly bear was listed as a federally threatened species in 1975, it’s made a remarkable comeback.

Decades of active hunting and poisoning, habitat destruction, isolation and manipulation pushed it to the brink of extinction in the lower 48 United States. California used to have the most, even putting it on its state flag. Californians killed their last grizzly in 1922. It was erased from its native prairie grasslands by the 1880s, just eight decades after the Lewis and Clark journals gave urban Americans their first account of the great bear.

By 1940, after heavy use of strychnine poisoning by farmers and ranchers, wildlife managers estimated the United States had perhaps 300 grizzlies (not counting Alaska). Today, about 1,850 roam the mountains of Montana, Idaho, Wyoming and Washington.

“There’s been a real evolution of attitudes that got us to this point,” said Chris Servheen, the grizzly recovery manager for the U.S. Fish and Wildlife Service in Missoula. “We used to be all about killing predators. Now we’re concerned about predators.