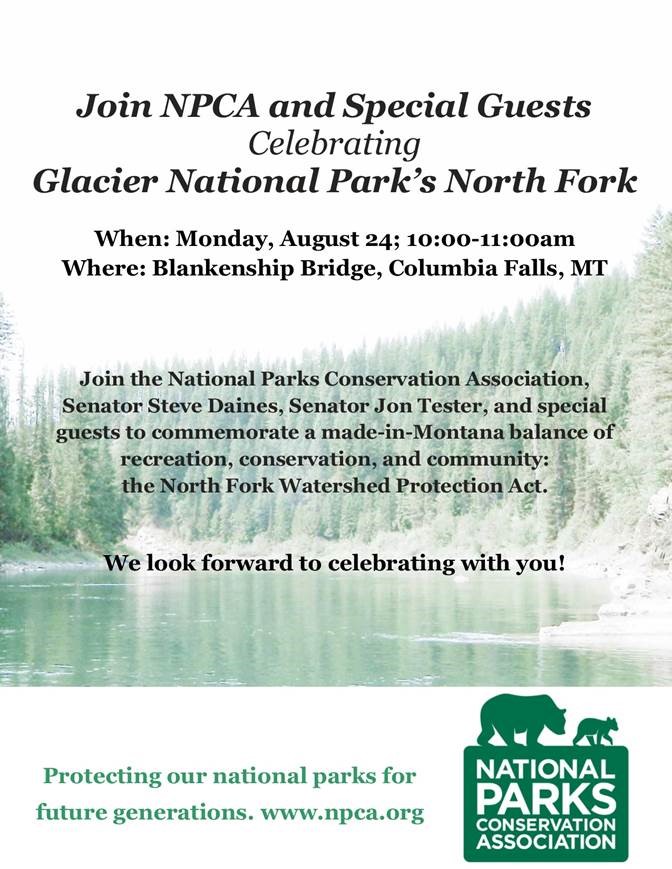 Passage of the North Fork Watershed Protection Act is beginning to attract notice in the Canadian press, including this piece in the Kootenay News Advertiser . . .

“Passing this legislation represents a truly significant accomplishment for the BC–Montana relationship, and for the health of our shared Waterton-Glacier Peace Park region. It was vitally important for the U.S. government to pass this legislation to balance similar legislation passed in BC in 2011 that banned mining and energy development in the transnational Flathead watershed,” says John Bergenske, Conservation Director of B.C. conservation group Wildsight…

Montana and B.C. had been at odds over appropriate industrial development in the Flathead watershed since 1975, when Rio Algum, Ltd. proposed a mountaintop removal coal mine just six miles north of the international border and the U.S. Glacier National Park. That initial dispute took 13 years to settle, and required the intervention of the International Joint Commission (IJC) that has authority over the Boundary Waters Treaty of 1909 between Canada and the U.S.

The Flathead Valley Chapter of Trout Unlimited has long been committed to protecting the Flathead River system, one of the last best strongholds for native bull trout and westslope cutthroat trout. The recent bipartisan support and passage of the North Fork Watershed Protection Act is a major step in the right direction. Hats off to Sens. Jon Tester and John Walsh and to Rep. Steve Daines for working together to protect the North Fork of the Flathead from future mineral and energy development.

Given recent developments with coal mining in the Elk River drainage in British Columbia, and the continued low bull trout population numbers, as evidenced by annual counts of spawning beds, or “redds” in North Fork tributaries, the passage of this act is both timely and necessary.

The Flathead Beacon posted a summary today of the area’s most newsworthy stories of 2014, including passage of the North Fork Watershed Protection Act . . .

More than four decades after local conservation groups began efforts to protect the North Fork of the Flathead River from energy development, Montana’s congressional delegation inched a bill to furnish permanent protections on the pristine watershed over the finish line. The North Fork Watershed Protection Act was signed into law Dec. 19, and bans future mining and drilling on 383,267 acres of federal land in the North Fork. The bill and seven other Montana land bills were attached to the must-pass National Defense Authorization Act, and supporters said the rare bipartisan collaboration and tireless local support of the measure is symbolic of a strong conservation legacy in the Crown of the Continent.

Chris Peterson of the Hungry Horse News did a nice write-up on last Friday’s meeting with Senators Tester and Walsh . . .

A lot has changed since 2006, when Glacier National Park superintendent Mick Holm traveled north to Canada to meet with British Petroleum officials who were considering coal bed methane gas development in the Flathead River drainage.

That was one of many battles over the future of the North Fork of the Flathead over the past 40 years. The struggle finally came to an end on Dec. 18 as President Obama signed the 2014 National Defense Authorization Act.

Last Friday, December 19, a group of folks met with Senators Tester and Walsh at the Belton Inn in West Glacier to celebrate the passage of a number of Montana lands bills, including the North Fork Watershed Protection Act. Yours truly was there, along with a fair number of other North Forkers, conservationists, business people, community leaders and federal officials. The media was out in force. I knew perhaps a third of the folks in the room.

The meeting was informal, with both politicos in blue jeans and very accessible. They even showed up ahead of time to have more time to chat with the attendees. Everyone made a point, before and after the speechifying, of thanking the senators for getting legislation through the system that was developed collaboratively here in Montana. It was all very adult and non-political. Refreshing.

There’s been a ton of attention from both the press and from a number of conservation outfits. Rather than generate a bunch of individual posts, I’m going to do a roll-up here, with links to a representative sample of the online coverage . . .

Victory for the Crown of the Continent (Montanans for Healthy Rivers newsletter; also has nice Trail Creek article)

At 3:00 p.m. this afternoon, the annual National Defense Authorization Act, along with a package of Montana lands bills including the North Fork Watershed Protection Act and the Rocky Mountain Front Heritage Act, was passed by the Senate and sent on to President Barack Obama’s desk for signature.

This is very good news for the protection of the North Fork. It is also excellent news for our friends on the Rocky Mountain Front, not to mention carrying with it the first new wilderness additions in Montana in 31 years.

Here’s the lead-in for an early article in the Missoulian. We’ll add links to more coverage (see below) as it occurs . . .

The vote wound up at 3 p.m. after several attempts to add amendments and return it to committee. The final tally was 89-11, with both Montana Democratic senators Jon Tester and John Walsh voting in favor. Walsh held the gavel as Senate chairman at the start of the vote.

It also includes a package of 70 public land management bills; the biggest collection since the Omnibus Public Land Management Act of 2009. They create about 250,000 acres of new wilderness designations and protection of other lands from energy development…

An “historic” lands package including provisions of significant impact on Northwest Montana approaches a critical vote in the Senate . . .

A raft of public lands measures is headed for a vote in the U.S. Senate this week following a last-minute series of negotiations between the state’s congressional leaders, who together marshaled a bundle of Montana bills into the historic package.

The product of 11th-hour arbitrations that nearly collapsed in the waning moments of Dec. 2, the sprawling lands package was rolled into the National Defense Authorization Act, a must-pass piece of legislation that has lawmakers optimistic it would sail through the Senate with the lands bills intact.

This is the conclusion of a two-part series by Rob Chaney of the Missoulian on the roll-up of Montana land-use legislation inserted into the National Defense Authorization Act last week . . .

While everyone wonders if the U.S. Senate will pass a huge package of public lands legislation this week, many Montanans are already looking beyond the fate of the two wildland protection bills in the mix.

“The positive thing is a logjam is going to break loose,” said Scott Bosse of American Rivers in Bozeman. “That helps future conservation bills. I think members of our delegation were reluctant to take on other big projects as long as the logjam existed.”

Wilderness advocate Steward Brandborg felt quite the opposite…