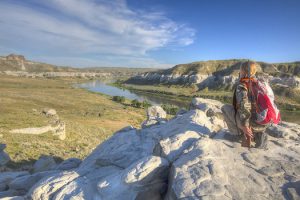 Here’s an interesting press release regarding Montanans’ attitudes towards general conservation. Not surprisingly, they’re for it, even to the extent of targeted tax increases. (Kudos to Debo Powers for spotting this one.) . . .

Montanans are willing to “put their money where their mouth is” when it comes to conservation, according to a new survey.

The Montana Outdoor Heritage Project has released results of its summer survey of more than 11,000 residents, or about 1% of the state’s population.

More than 80% of respondents said they “strongly” or “somewhat” support more dedicated conservation funding – even if it means higher taxes.

A large majority of Montanans consider themselves outdoor fanatics and believe the state’s natural resources should be protected, according to the ninth annual Conservation in the West Poll from Colorado College.

Eighty percent of respondents in Montana say they are outdoor enthusiasts – the highest number among the eight western states polled.

The greater sage grouse conservation plan is drawing fire from both sides . . .

Environmental groups sued Thursday to force the Obama administration to impose more restrictions on oil and gas drilling, grazing and other activities blamed for the decline of greater sage grouse across the American West.

A sweeping sage grouse conservation effort that the government announced last September is riddled with loopholes and will not be enough to protect the bird from extinction, according to the lawsuit filed in U.S. District Court in Idaho.

It follows several legal challenges against the same rules from the opposite end of the political spectrum. Mining companies, ranchers and officials in Utah, Idaho and Nevada argue that the administration’s actions will impede economic development.

Everyone knows to take government budget numbers with a grain of salt, right? Still, this overview of the money being directed towards sage grouse conservation is pretty interesting . . .

Spending on a government-sponsored initiative to help struggling sage grouse populations in the West is projected to exceed $750 million by 2018.

The U.S. Department of Agriculture said Thursday the money will conserve an estimated 8 million acres of sage grouse habitat. Federal officials are more than halfway to that goal since starting the Sage Grouse Initiative in 2010.

The chicken-sized birds are found in 11 Western states. They’re being considered for federal protections after their numbers plummeted in recent decades.

The public is invited to participate in the upcoming Northern Continental Divide Ecosystem (NCDE) Spring Meeting hosted by the Flathead National Forest.

The meeting is scheduled from 10:00 AM to 3:30 PM on April 23, 2014 at the Hungry Horse/Glacier View and Spotted Bear Ranger District Office located at 10 Hungry Horse Drive in Hungry Horse, Montana.

During the meeting there will be an update on the time line and next steps for the Conservation Strategy Plan, efforts to provide a new Grizzly Bear Lesson Plan for high schools, bear mortality rates for 2013 and bear management spring activity.

The Flathead National Forest is one of many agencies and organizations working to ensure the sustainability of the grizzly bear population in the Northern Continental Divide Ecosystem. Additional information on those efforts can be found at: http://www.fws.gov/mountain-prairie/species/mammals/grizzly/continentalindex.html

Some good news from British Columbia: Teck Resources bought up a sizable amount of land (almost 28 square miles) in southeast British Columbia for conservation purposes, most of it in the Flathead River drainage. The Vancouver Sun has the story, including a map . . .

The company said it purchased more than 7,000 hectares in the Elk and Flathead river valleys from Tembec Inc., not for mining but to preserve wildlife and fish habitat. “While not amenable to mining, the lands have the potential to be used for conservation purposes,” the company announced.

If it passes, the open space bond on this November’s ballot is likely to have some impact on the North Fork in the future. Michael Jamison has a good write-up on the issue in the October 13, 2008 online edition of the Missoulian . . .

Flathead County, home to the three fastest-growing cities in Montana, is losing agricultural and forest open space at a tremendous rate, as developers build subdivisions across rural lands.

“It’s been a steady loss,” said Marilyn Wood. “We can’t afford to allow that to continue.”

Whether locals can afford to stop it is another matter entirely.

On Nov. 4, when voters go to the polls here, they’ll be asked to back a $10 million open space bond, money that will buy rural land – or at least conservation easements on land. The idea is to secure recreational access, especially at waterfront sites, to protect wildlife, to preserve sweeping views, to ensure water quality and to allow the Flathead’s rural way of life to persist into coming decades.

“Ten million sounds like a lot,” admitted Wood, who runs the Flathead Land Trust, “but it’s really a very reasonable amount for a program that’s going to have such a big impact.”

And residents appear to agree. A survey of Flathead Valley residents showed two-thirds of those polled supported the 20-year bond, which will cost the owner of a $200,000 home about $19 a year.