Remember the grizzly photographed sitting in a cherry tree in Whitefish last year? This spring, still a nuisance, it was captured again and relocated to the Spotted Bear River drainage . . .

A 3-year-old male grizzly bear that had been spotted feeding in yards and pastures near Fortine has been captured and released in the Spotted Bear River drainage.

The bear was captured on May 23 in the Deep Creek drainage and released the next day, according to Montana Fish, Wildlife and Parks officials.

The bear was “very habituated to human activity and being around homes,” according to a press release, and landowners were concerned about how much time the bear was spending around homes. FWP made the decision to capture the bear and relocate it to a more remote location.

The day it was captured, I saw this bear eating serviceberries along the North Fork Road. Another unfortunate example of the fate of many bears that develop the habit of breaking into human structures in search of food. Darn it . . .

State wildlife managers killed a female grizzly bear after the animal broke into three camp trailers in the North Fork of the Flathead River drainage.

John Fraley, spokesperson for Montana Fish, Wildlife and Parks, said an adult female grizzly bear was captured July 29 on private property south of Red Meadow Creek. A bear had broken into three camp trailers, which were unoccupied at the time but where people had been living.

According to Grizzly Bear Management Specialist Tim Manley, the bear was captured in a culvert trap that was set within two feet of one of the trailers. The trailers had been broken into on the evening of July 28. Once inside the trailers, the bear ate dog food along with food in the cupboards.

Yet another delinquent grizzly was moved to the North Fork earlier this month. The Hungry Horse News has the story. Also, check out the video . . .

A 3-year-old male grizzly bear was captured April 10 at a private residence along Tamarack Road northwest of Columbia Falls. The 211 pound bear was captured by Montana Fish, Wildlife and Parks bear and lion specialist Erik Wenum after the resident reported a bear had killed some of his young chickens.

The young bear was anesthetized, radio-collared, and released by grizzly bear management specialist Tim Manley. The Interagency decision was made to release the bear back into the wild since it had no previous known conflicts. The grizzly bear was released on the afternoon of April 11 in the Whale Creek drainage of the North Fork of the Flathead, 34 straight line miles from where it was caught.

See also: Video of the bear being released 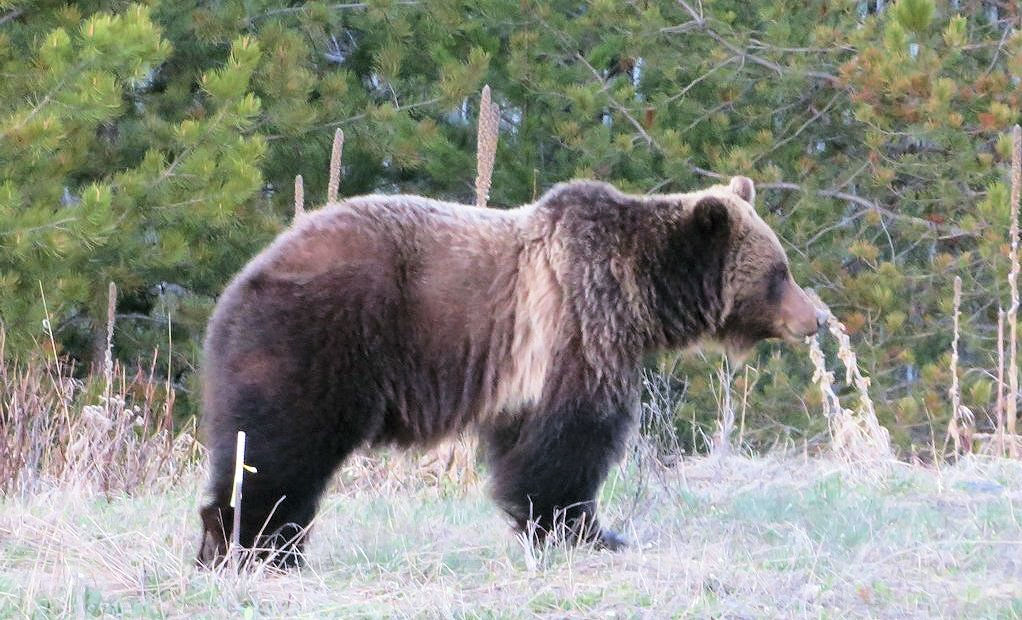 Near Eureka, at least one young grizzly bear has been observed feeding on apples and walking through yards. Traps were set for that bear, but it hasn’t been captured yet.

West of Fortine, landowners buried a dead horse and noticed something had dug it up. They put up a trail camera and 3 different grizzly bears were photographed. One of the grizzly bears was wearing a radio collar that isn’t functioning properly. In an attempt to capture that bear and change the collar, two culvert traps were set. The horse was reburied and an electric fence was installed around the site along with remote cameras. On September 6th, an unmarked, young adult male grizzly bear visited the site and was captured. This male was radio-collared and translocated into the Whitefish Range. The radio-collared grizzly we were attempting to capture did not return to the trap site and the traps were pulled.

The best way to avoid conflicts with bears is through prevention. Take down your birdfeeders until bears have denned, don’t leave garbage, pet food, or grain outside. Use electric fencing to protect your poultry, beehives, and fruit trees. Pick your fruit as soon as it is ripe. Contact Montana Fish, Wildlife & Parks if you have a bear conflict or need information or assistance on securing attractants. You can get more information at http://fwp.mt.gov/fishAndWildlife/livingWithWildlife/beBearAware/.

It’s that time of year again when bears are packing in the calories in preparation of hibernation . . .

Wildlife managers are reporting an increase in grizzly bear activity and conflicts across Northwest Montana as the winter denning season approaches.

Between 20 and 30 grizzlies were involved in conflicts throughout the region in recent weeks, according to Montana Fish, Wildlife and Parks. Northwest Montana has the largest population of grizzlies in the continental U.S. with over 1,000.

Montana Fish, Wildlife and Parks spokesperson John Fraley said activity tends to pick up in autumn as both black and grizzly bears search for larger amounts of food in order to survive the winter in their dens. Female grizzly bears with young are especially in need of additional food as they nurse their cubs and need the extra calories.

Yearling grizzly bears busted for getting into trouble and relocated are not any more likely to offend again than bears with a clean rap sheet.

“If a bear gets in trouble, it doesn’t mean it’s a chronic offender,” said Mark Haroldson, who conducted a study for the U.S. Geological Survey in Bozeman.

Although the research is still preliminary, Haroldson said the data came partly from information collected in the late 1970s and 1980s as bear managers sought to reverse the decline in grizzly bear populations in the Greater Yellowstone Ecosystem by separating young bears from conflict mothers. The thought was that the mothers might be teaching the yearlings bad behavior.

Here is this year’s “a fed bear is a dead bear” story. Glacier Park had to kill a food-conditioned black bear in the Two Medicine area of the park . . .

Glacier National Park Rangers euthanized a black bear from the Two Medicine area on Friday, July 18, after several reports in which the bear exhibited apparent food-conditioned behavior, including an incident in which the bear charged a picnicking family.

On Thursday, July 17, the black bear approached a family that was eating at a picnic table at the Two Medicine Picnic Area. The family yelled and clapped hands, but the bear charged towards the table, and the family retreated to their vehicle. The bear consumed the food and left the area after a park ranger repeatedly hazed the bear with rubber bullets and bean bags.

This same black bear was observed digging in a fire pit in the area, and did not seem bothered by human presence. There were several sightings of the bear on and near to the park trail system along the shore of Two Medicine Lake. The bear was determined to be a food-conditioned bear, and a threat to human safety. Trail and picnic area closures were implemented in Two Medicine.

A grizzly bear captured on the Blackfeet Indian Reservation after it killed a calf was relocated to the Whale Creek drainage of the North Fork Flathead River.

On July 16, Blackfeet tribal biologists captured the 220-pound, 2-to-3 year-old-male grizzly bear at the site of a calf kill near the Montana and Alberta border.

A lot of bear deaths recently, including two black bears that had become conditioned to getting food from humans . . .

Wildlife officials said Thursday they were investigating the deaths of three grizzly bears east of Flathead Lake, and that two black bears had been put down for aggressively seeking human food.

Grizzly Bear Management Specialist Tim Manley said that the bear had been reported eating apples in residential areas over the past week.