On the heels of the federal government’s proposal to delist the grizzly bear population in the Yellowstone National Park area, this year’s annual report on Glacier National Park and the surrounding region shows the population continuing to hit its recovery targets.

Grizzlies in the lower 48 states were listed as “threatened” under the federal Endangered Species Act in 1975, after their historic range and population plummeted over decades of over-harvesting and habitat loss.

The Northern Continental Divide Ecosystem boasts the highest number of great bears among the five geographically distinct populations in the Northwest. It covers more than 5.7 million acres in Northwest Montana and includes Glacier National Park, the Bob Marshall Wilderness Complex and surrounding lands.

Documented mortalities in the Northern Continental population, now estimated at 982 individuals, dropped substantially in 2015 from the two preceding years. That’s something of a return to normal, according to Cecily Costello, a research wildlife biologist for Montana Fish, Wildlife and Parks who was one of the lead authors on the annual report. 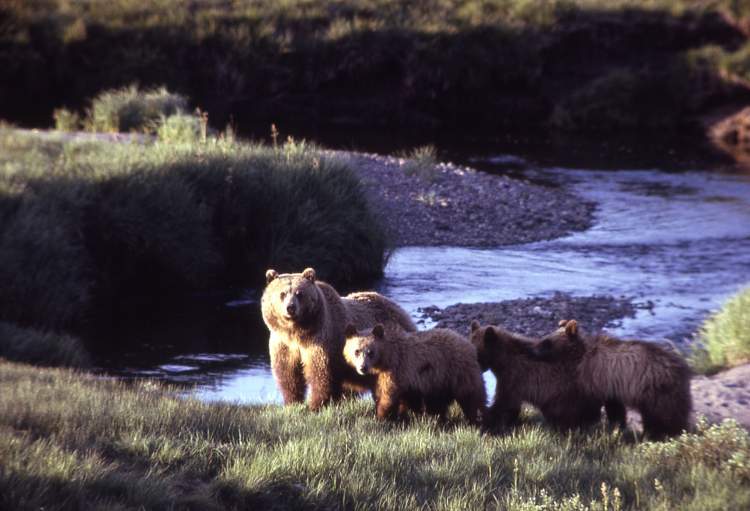 Grizzlies continue to move down from the mountains and out into their old range on the high plans . . .

As the lone grizzly bear expert for the Montana Fish, Wildlife and Parks’ Region Four office, Mike Madel hasn’t had any problems keeping busy along the Rocky Mountain Front. “It was a heck of a year,” he said during a presentation to regional grizzly experts Wednesday near Kalispell. “We had bears expanding way out into the plains again, and further than we’ve ever had them.”…

The range of grizzly bears along Montana’s Northern Continental Divide has roughly doubled since they received federal protection under the Endangered Species Act in 1975, and much of that new territory has been east of the Rockies.

Grizzlies are increasingly present on the Blackfeet Indian Reservation, often following the winding, tree-lined drainages that extend east from the mountains. Even Great Falls might not be immune to the encroaching bears for long.

Grizzly bears in the Northern Continental Divide Ecosystem (NCDE) could be removed form the threatened species list as early as next year. The U.S. Fish and Wildlife Service (USFS) is developing a “conservation strategy” to deal with this eventuality. On May 2, a draft version of this plan was released for public comment.

There is going to be a lot of public comment, especially since delisting could result in hunting of this iconic animal.

Here are some links to bring you up to speed . . .

The USFS “Grizzly Bear Recovery” page contains information and links to material on grizzly bears in the NCDE, including links to the “Draft NCDE Grizzly Bear Conservation Strategy” and appendices.

Some useful articles in the local press:

The debate over the Grizzly’s status in the Yellowstone Park area continues . . .

Grizzly bears in and around Yellowstone National Park will keep their threatened status for at least the next two to three years, as wildlife officials said Friday they plan to bolster their case that the species has recovered.

Federal and state officials insist there are enough bears in the three-state Yellowstone region to guard against a reversal of the decades-long effort to bring them back from near-extermination.

From the Associated Press . . .

Wildlife biologists say that reports of grizzly bears are increasing in Montana’s Beartooth Front, but it’s difficult to tell if there are more bears or just more bear sightings.

U.S. Fish and Wildlife grizzly bear recovery coordinator Chris Servheen says bears are pushing out in all directions from the Greater Yellowstone Ecosystem…

Grizzly numbers in and around Yellowstone National Park dropped slightly this year, indicating the region’s bear population could be leveling off after decades of steady growth, researchers reported Thursday.

An estimated 593 bears are roaming the region of Wyoming, Montana and Idaho, said Mark Haroldson, a bear researcher with the U.S. Geological Survey. That’s down from 602 last year and compares with a 4 percent average annual growth rate since the mid-1980s.

“Statistically, the evidence is it’s flattened out,” Haroldson said.

From the Flathead Beacon . . .

Researchers are planning to collect grizzly bear fur samples snagged on barbed wire as part of a three-year study in northern Idaho and northwestern Montana.

The study, which begins next summer, should give a more precise estimate of the number of grizzlies in the 2.4-million acre Cabinet-Yaak ecosystem, said Kate Kendall, a U.S. Geological Service scientist at Glacier National Park.

She also said researchers will also be able to use DNA to determine blood lines and gender.

Probably not a big surprise to long-term residents, but it’s nice to have some recent numbers on the increased griz population. From yesterday’s Flathead Beacon . . .

The number of grizzly bears in Northwest Montana is on the rise, according to the National Park Service.

John Waller, wildlife biologist for Glacier National Park, said data being collected in the area of the northern continental divide – approximately 7 million acres between Missoula and the Canadian border – shows the bear population has risen by 3 percent annually since 2004, when there were 765 grizzly bears. Today the number is estimated to be about 950.

Besides the flood threat, heavy snowpack in the mountains means that bears emerging from hibernation are foraging further down-valley for food. Bear managers have had a busy time of it dealing with nuisance bears. The Daily Inter Lake surveys the situation . . .

With too much snow at higher elevations and an abundance of food attractions in the valleys, grizzly bears and black bears have been stirring up trouble lately.

This week’s Hungry Horse News columnists give the North Fork a fair bit of ink. “Her N. Fork” by Carol Vuchetich discusses the experience and responsibilities of living on the North Fork. Larry Wilson’s “North Fork Views” is a nice end-of-summer piece, ruminating on a quiet fire season and the big uptick in bear sightings. And G. George Ostrom even gives the North Fork (and Larry Wilson) a mention as he talks about Lynx, past and present.